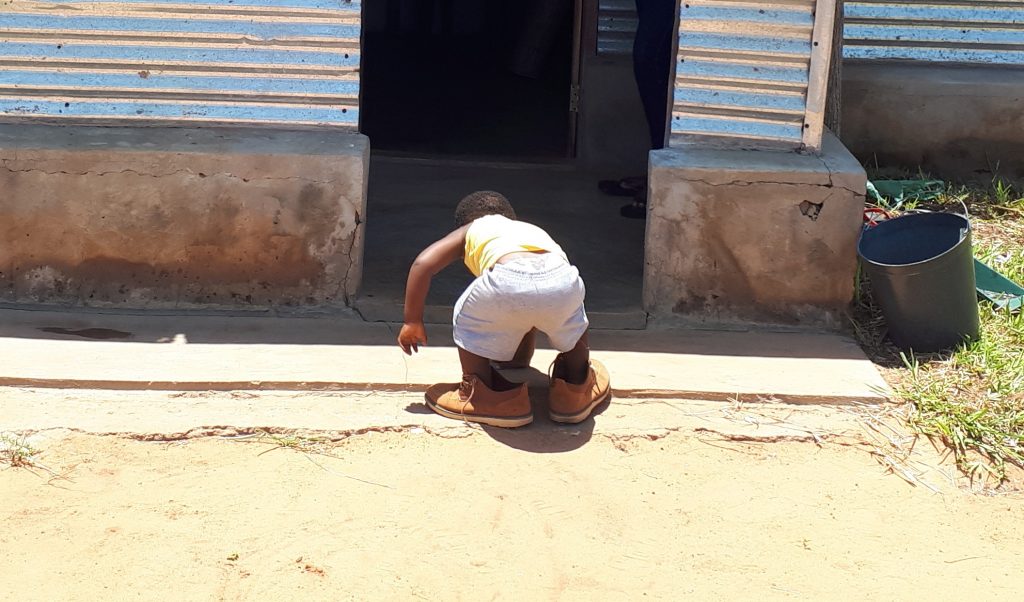 There was a little boy called Matsi-li. He was sometimes called the Boss by his mother because she had to give him her full attention all day long.

Matsi-li, the Boss, did not like the heat. His mother realized that and put water in a basin just to cool him a bit. While bathing, Matsi-li splashed most of the water onto the floor which now looked like a swimming pool. After some time, Matsi-li started crying because there was no water left in the basin to cool him. Guess what Matsi-li did? He climbed out of the basin and crawled into the imaginary swimming pool. Now he cried with laughter and was happy again.

There were Matsi-li, his mother and the babysitter, on their way to visit his grandmother. When they arrived at his grandmother’s house, he jumped onto his grandmother’s chest and started touching her face, looking at her attentively, like someone who had some questions to be cleared out. While sitting, welcoming and greeting each other, he started “PAPA PAPA PAPA PAPA”, as if he was singing but calling his father in Portuguese. Everyone got surprised, but he did not care and continued. It seemed he had broken with the African belief which says that the newborn’s first word must go to the mother. They expected Matsi-li to say ‘Mama Mama’, which was very hard for him until the age of 8 months. This sometimes bothered the mother. He may be a new revolutionary family member.

Matsi-li with his favourite food

At the age of eight months, Matsi-li’s parents decided to give new food to their son. He used to be fed on breast milk but as time went by, he was growing and porridge came on his way. On the first day, he managed to devour a plate full of porridge mixed with baby milk. Two days later, the parents gave him a Nutryday Danone, and it seemed to him that God had made that day a special one. He ate two small cups of Danone in a short time and started crawling from one side to the other with much joy. In the following days, he could not think about any other type of food, he only wanted Danone. The parents kept insisting on different kinds of food but he shifted the mother’s hands holding a plate of porridge, and started to cry, running to the bedroom. What is so amazing is the fact that when he is hungry he starts pointing at the box in which the parents keep his food, and when you show him a cerelac package he cries. He gets calm again when he sees a cup of Danone and life is back in full for him. What an expensive boy!

Matsi-li liked to stroll with his father. Whenever he realized that his dad was going for a walk or maybe going to a shop, the boy would make a strange sound trying to show interest to come with him.

While strolling, he attentively observed the buildings, the roads, the cars and if they happened to come across other people, he would look at them until they said a word to him. One day, Matsi-li and his parents were buying bananas somewhere around Maputo. A car stopped and a girl got off the car and came close. Maybe she was going to buy grapes, but Matsi-li looked at her in a such a way she could not resist him. She took his small hand and said “Que bebé fofinho” which means “what a pretty baby”, and he smiled.

Another day, he was on a ‘chapa’ a mini bus used for public transport. He looked to everybody in there, and one lady could not withstand him. She held him in her hands and both started to play together. It was completely quiet on the chapa, only Matsi-li and the lady could be heard playing. The lady also expressed “Oh what a lovely baby”.

I am afraid, the boy might bring problems home because of his appearance, LOL.

There he was, sitting with his tablet. I got puzzled but amused at the same time. He was playing video games unconsciously. With his little fingers touching the video player, the video started playing. That made him so happy that if you came near him and tried to take the tablet away from him, he produced some threatening sounds to keep you away. Sometimes, he laughed while watching the clip on the tablet. I was not sure if he was enjoying the messages or if he was happy because of the movements performed by the singers and dancers. When the video was over, he played it again and again. What surprised me was at which age he was booming in the world of technology. This was a new Bill Gates born in Mozambique. Guess what, he was only 6 months when he started to play with the tablet. The ‘Mummy and Daddy’ video, performed by some Zimbabwean children who copy the behaviour of their parents, engrossed Matsi-li’s mind. There was another video by a South African young girl, reciting poems about African generations. These two videos became Matsi-li’s kind of entertainment.

Matsi-li hated being touched on the head. But one day his parents had to give him a haircut because his hair had grown so big that the heat started bothering him. His mother held him tight so that his father could perform the action easily. When Matsi-li realized that something was happening to his body he started screaming and kicking his mother with his little legs while producing very offensive sounds. That was not an excuse for his father to stop cutting the hair. After some minutes the battle was over and Matsi-li looked at his parents with a big smile. Although he was only six months old, this smile was a sign of relief. Finally, he was released from the oven on his head.